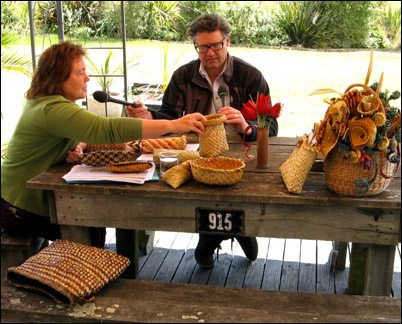 Earlier this year, Cosmo Kentish-Barnes of Country Life interviewed me about flax weaving and the interview was aired on Country Life on 11 and 12 July. (The interview can still be played online via the Radio New Zealand archives.) In case any of the regular readers of this blog, or regular listeners of Country Life, are interested in seeing the things we talked about, I thought I’d put up a brief post. 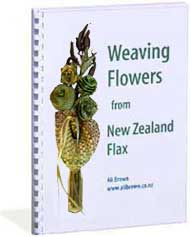 In preparation for the interview I got together some weaving we could talk about as well as my book Weaving Flowers from New Zealand Flax. Cosmo asked questions about the book, the weaving, how I became interested in weaving, how long I’d been weaving for and so on. As I’m working hard to complete my next book, on how to weave baskets, I also chattered on about that.

This is the pot with the spiral pattern that I discussed. The pot is started with a plait at the base and the coloured strips are added in the same sequence that they are for a diagonally striped basket i.e. two crimson strips and then two natural-coloured strips alternately on each side. I then wove the sides up and rolled down the top to give the pot a strong rim. As this was an experiment to see what effect the spiral pattern would have on a pot, I used quite wide strips. I think the result is pleasing and would look even better if the pot is made with thinner strips. The black and white kete with the whitebait pattern that I talked about in the interview is illustrated on the Dyeing page of this website and the travel tool kit features at the end of the post on the hui at Kawerau. 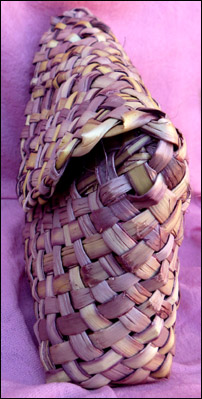 One of the pieces of weaving that doesn’t feature in the programme but took Cosmo’s attention was the soft, muted colour of this pink bag, which is photographed side-on. I mentioned that I’ve sometimes played around with natural dyes as well as chemical dyes, and the bag was an experiment in using red wine as a dye. In the event, this bag used up six bottles of red wine, which he felt was rather a rather a waste of good wine and, in retrospect, I have to agree. I just hadn’t realised how many bottles it would take. At some point, I might try dyeing flax with the red wine skins left over from wine making to see how they turn out.

Another piece of weaving we talked about is this long sculptural experiment, woven with the technique that’s used for weaving a large container or waikawa. I started with six long leaves of flax that I pulled apart right down to the end of the butt, ensuring that the two sides were still joined together at the butt. I then wove the sides up as far as I could go with the lengths of the leaves, and wound the ends of the leaves that were long enough around a cylinder so they curled as they dried. Once dry I unwound them from the cylinders and they hang down like curls on a head. This was a fun piece to make although it took quite a lot longer than I expected and was a bit awkward to weave as it got longer. It’s been much appreciated by my cats, who loved climbing up it when they were kittens. 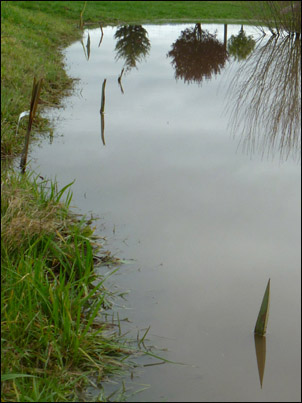 We also talked about the types of flaxes that can be used for weaving and Cosmo wondered if the ones he saw around the garden could all be used. The flaxes that were planted here when I moved here just over two years ago are mostly ornamental and generally only good for weaving flowers. I explained that, since I moved here, I’ve planted a number of weaving flaxes from the Te Kohinga Harakeke o Aotearoa — National New Zealand Flax Collection at Landcare Research in Lincoln. This is a collection of flaxes that Rene Orchiston put together over a number of years from weavers in the North Island. Landcare Research now has guardianship of the flaxes, replants the different types regularly and offers divisions to weavers who want to plant them for harvesting. 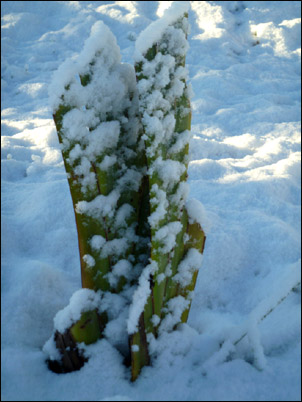 The divisions I planted are now growing well around a winter pond, although they are subject to very dry conditions in summer and very wet conditions in winter. In the middle of a wet winter some of them can be completely covered apart from a little tip poking up, but the water recedes reasonably quickly over a few days, and their occasional dunking doesn’t seem to have affected their growth. When first planted in the autumn of 2012 the divisions were small stumps with cut-off leaves. They were covered in snow that winter and covered again the next winter but survived these conditions well.