January this year I tutored two flax weaving workshops at Camp Quality, which is a summer camp for children living with cancer. Weaving wristbands seemed like the ideal choice as these are acceptable to both boys and girls and they don’t take too long to weave. To prepare for the workshop, I gathered together a selection of flax strips dyed in different colours and some flax leaves. 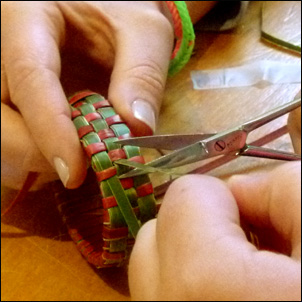 I prepared the base for each wristband from the flax leaves and split the long length of the strip used to make the band into three even-width strips and the children chose the colour of their weaving strip. They wove the pattern by weaving the coloured weaver over and under the three strips all the way around which results in a checkerboard pattern as shown here. 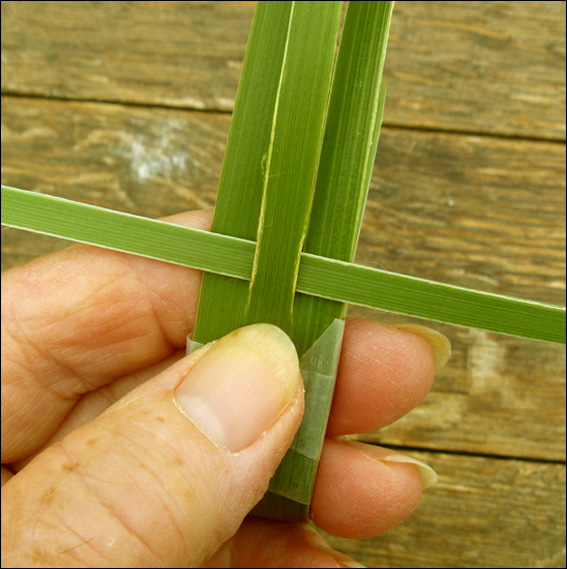 Some children tried weaving more complicated patterns. One used two different coloured strips as the weavers, alternating them at each turn. A couple of others were keen to try the Steps pattern illustrated on the wristband shown here. The pattern is made by the way each of the strips around the wristband are positioned before the weaving strip goes over the top of the band. If you’d like to try this pattern, instructions on how to weave it are here.

At camp each child has a twenty-four hour buddy who gives them one-on-one support and the wristbands turned out to be a popular choice for the buddies too, a couple of them returning to make a second one. Most people wove the first wristband for themselves and then went on to weave others for family and friends.

I’ve found from past workshops that weaving wristbands is a popular project and can be woven by children from about five years upwards. The younger ones may need assistance but do tend to get into the rhythm of weaving after a while. This workshop proved how suitable wristbands continue to be for a children’s weaving workshop, as well as being of interest to all ages. 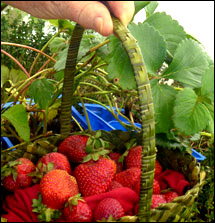 The same technique used to weave a pattern on wristbands can also be used to weave over the base of a handle for a basket. For example, the handle illustrated here has a flax butt base and the Steps pattern is woven over that. This Step pattern is woven with the weaver weaving over three strips instead of five, as shown in the example of the wristband. It’s important to keep the tidying of the ends on the underside of the band neat and tidy as the underside of the handle is seen as much as the top side.