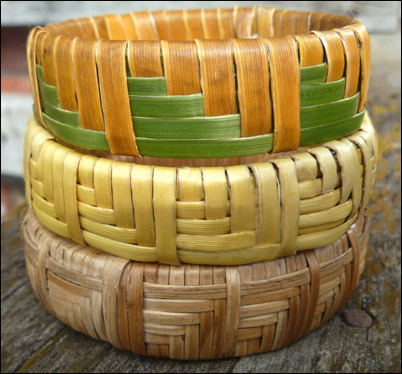 To start, prepare the base circle of the wristband, secure it with tape or similar and split the long end of flax into five equal-width strips. Prepare at least three more strips of flax that are the same width as the strips on the wristband. These strips can be the same colour as the other strips or a different colour for a more distinctive pattern.

Bring the end of the coloured strip up and over the five narrow strips and lay it flat on top of them. Hold it tightly in position. Make sure that the short end of the strip stays where it was to start with.

Hold the weaving strip tightly in place and fold back down the first narrow strip on the left. Fold it as close to the coloured strip as possible. This helps to keep the weaving tight.

Bring the coloured strip through the centre of the wristband and up and over the four strips that are left. Lay it over the strips as close to the fold of the first strip as possible.

Bring all of the green strips forward again and position them neatly in place along the wristband. The pattern sequence is now complete. Carry on by bringing the coloured strip around and over all the strips again.

Care needs to be taken when the weaving reaches the starting point as the weaving needs to be joined so there is no break in the pattern. Make sure there is enough space left to weave a complete repeat of the pattern. Adjust the weaving and push it tighter around the base to make more space if needed for a full pattern repeat. Thread the ends in as shown in these instructions for a wristband.

The Steps pattern can be woven with different numbers of strips going lengthwise to suit the desired width of the handle and the width of the strips. In this example, which is on the handle of a basket, there are only three long strips that are used on the pattern.