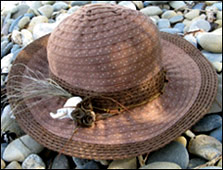 Summer is the time for holidays, beachcombing, sun hats and plenty of free space for creativity. For me, it’s a time for putting into practice some of the weaving ideas I’ve had during the year and haven’t tried out, as well as a time for just playing around with weaving.

Hats are fun to decorate, and shells add a summery, seaside look to a hat. I found this broken shell on the beach at Ruby Bay, filled it with little flax flowers and attached it to the hat band. The natural bronze colour of the flax I used, which was growing by my camp site, happened to match the brown colour of the hat, although the colour will fade in time. 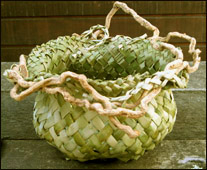 Adding natural objects to the rim of a bowl can create an interesting look. I found this smooth, twisted root on the beach and it was supple enough to wind around the top of a woven bowl. The top of the bowl was finished in a French plait, which leaves the ends of the plait straggling around the top on both the inside and outside of the bowl.

I rather like smooth, curved driftwood pieces as handles for baskets. In the piece illustrated here, I wedged one end of the driftwood into the weaving to keep the handle upright and tied it on with fine plaits by drilling a small hole through each end of the handle and threading the plaits through the holes and then tying them though the weaving. I’ve made a number of these three cornered baskets, or waka kete, and added shells or woven shapes to enhance them. This style allows for freedom of expression and use of structure that’s not the norm. 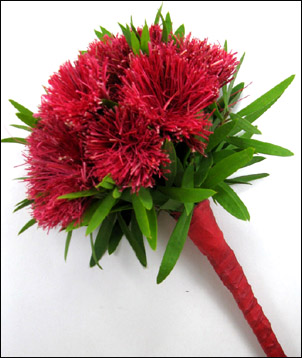 I have just released the second edition of my book, Weaving Flowers from New Zealand Flax. The new edition contains the same instructions as the first edition but also includes instructions for making a flax Pohutukawa, the flower of New Zealand’s Christmas tree. Real Pohutukawa flowers are stunning, but very delicate, and so not very practical for flower arrangements, but the flax version shown in this bouquet will last indefinitely. A variety of ideas for using the Pohutukawa are illustrated in the book, including instructions for making the hair decoration shown towards the bottom of the blog post Flax on the brain.