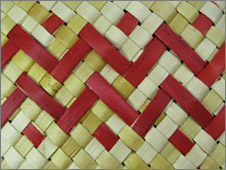 A bright, decorative look suitable for Christmas can be given to any piece of weaving by adding coloured strips of flax over the top of the existing weaving to make striking patterns. In the example on the left, I created a pattern by adding red flax strips on the top of a piece of undyed weaving. The good thing about this sort of patterning is that it can be removed later and the weaving will return to its original state. To overlay the pattern, I cut strips of red-dyed flax into lengths that were five times as long as the width of the strips used in the original weaving. I then inserted a length under one strip, over three strips and then under the next strip, on a diagonal, to create the first piece of the pattern. The next length was woven alongside this in the same way, to create the next piece of the pattern. For the dots, I inserted a shorter length of red flax over just one strip. The red strips were dry when I used them, although it may be easier to dampen the dyed flax before use. Be careful if you do moisten the dyed flax as the colour of the dye may come out onto the dried flax if the dyed flax is too wet. This red-coloured patterning would also look good against fresh green flax. 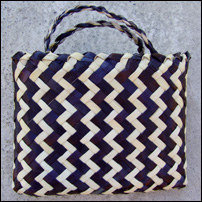 This way of putting patterns into weaving is quite different from the traditional way patterns are woven in flax weaving. In the traditional way, the dyed strips are woven into the main body of the weaving, and the pattern is made by the way the strips are woven together. In patterned flax baskets, or kete whakairo, the plan for the pattern, or whakapapa, is set at the beginning of the weaving when the dyed strips are included into a plait at the bottom of the basket. This way of incorporating patterns into the weaving is an advanced weaving technique, and examples of kete whakairo can be found in museums around the world. I wove the black and white kete pictured above using a pattern from Mick Pendergrast’s book Raranga Whakairo listed on the Reviews page of my web site. 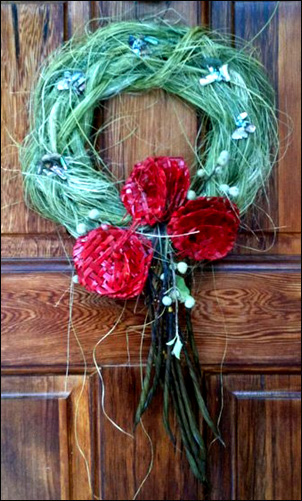 On another Christmas note, Phil — a customer who bought my book — sent me this photo of his wife Anne’s wreath, which is made from shredded flax and paua shell, and has three red woven flax flowers attached to the bottom of the wreath. I do like the way Anne has created the wreath, with a randomness in the use of the flax shreds but also structure in the shape, resulting a very attractive and original Christmas wreath. The New Zealand theme is further enhanced by the addition of pieces of paua shell attached randomly around the wreath. Instructions for making the woven flax flower that Anne has attached at the bottom of the wreath can be found here on my web site, and also in my book Weaving Flowers from New Zealand Flax.

While internet searching I found another interesting woven wreath, which is based on the three-dimensional star shown on the right. The wreath is made by shaping a number of these stars together in a circle. I haven’t been able to contact the owner of the photo of the wreath, Elmer, for permission to use it in my blog, but you can see the wreath here. If you’d like to try making this wreath, I have instructions for the three-dimensional star on a blog post I wrote a couple of years ago.

Addition 16 April 2011
Te Rangi Hiroa mentions in his book The coming of the Maori, that there are samples of historic weaving from the Chatham Islands and the Waitaki River area that have been woven with decorative strips overlaid on the foundation weaving. He concludes that “… overlaid plaiting was present in two marginal areas, which forms evidence that it was an earlier form of decoration which was supplanted in the North Island by the use of coloured foundation wefts.”

Over Christmas I finally had fun weaving flowers. The flower book so easy to follow

Glad you’re enjoying it Jenny and finding it easy to follow. Do send me some photos of your flowers if you get the chance.