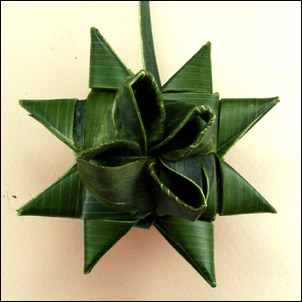 The flax weaving techniques used in basket making are often the same techniques that other countries around the world use in their traditional weaving, although the raw materials are different. I always find it fascinating to see a sample of this universal nature of weaving, so I was most interested when one of my students showed me a three-dimensional star, made with birch bark, that she had purchased on her recent visit to the USA. The star is the same as the one shown on the blog post, Weaving a flax star, but it has an extra step to make spikes on the star. These spikes give the star the three-dimensional shape like the one in this photo.

To make this three-dimensional star, follow the steps for making the eight-pointed star on the Weaving a flax star blog post, but don’t cut any ends off. The spikes on the star will be made with these two sets of four ends that are left.

Take the top strip of the two end-strips that are laying out to the right and bend it back on itself. The folded point underneath it is now showing.

Take the right-hand strip of the two end-strips that are coming out from the bottom of the star, and fold it up to the top, exposing the folded point at the bottom right.

Now fold it across to the right on a 45-degree angle. Keep the start of the fold as close to the centre of the star as possible. Press it down to crease it.

Bring the end of this strip back around and poke it underneath the first strip that was bent back on itself. Push the end right through so that it comes out between the middle of the folds of the top point on the left.

Pull the strip through until it folds around into a spike. Don’t pull too far or it will undo the spike. Squeeze the strip to make it more spikey. Alternatively, to make the spike more open, push your finger into the centre of the spike and push the flax out to shape it.

Repeat these steps for the other three strips on this side of the star. As this version has a flat side, it can be used to tie around gifts.

For the second version of the star, make spikes on the other side in the same way as the first side. To finish, cut off all the ends. This side view shows the spikes poking out from both sides. To hang the star up, split a thin strip off the inner side of one end and cut the rest of the strip off.

Incidentally, my student took bouquets of flax flowers with her on her trip to the USA and declared them as she went through USA customs. She reports that she had no trouble getting them through.

What a wonderful alternative to plastic! Loving the idea and the instructions are super clear. Thank you so much for sharing your knowledge.

Thanks Jessica. Glad you found the instructions clear and that you enjoyed making the star. Happy weaving!