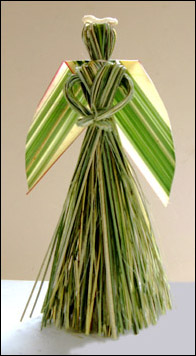 Even though there are only a few days to go before Christmas, there’s still time to make the odd flax decoration. Shredded flax lends itself to making an angel in much the same way that straw and grasses have traditionally been used to make angels in other cultures, and it is a very quick and easy design to construct. I’ve used variegated flax for the angel design illustrated in these instructions, which gives the wings a textured look, although any flax that not too strong or thick is suitable. 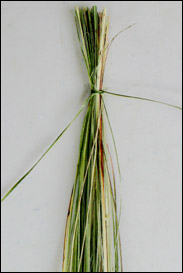 Shred two or three flax leaves with a fork or dog comb. Tie the shredded flax into a bundle with another piece of flax. 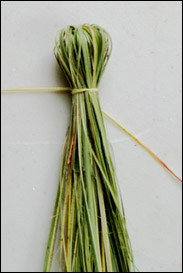 Turn the bundle up the other way so that the tie is inside the bundle and the shredded flax hangs down and around the tie, then tie another strip of flax around the bundle. This will make the neck of the angel. 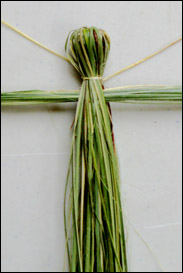 Shred a little bit more flax for the arms. Tie the shredded flax together in the middle and then slip it in between the shredded flax of the body. Push it up so that it’s right underneath the tie for the neck. 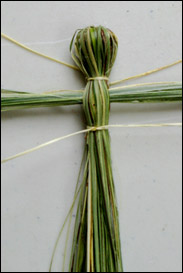 Tie another piece of flax around the body below the arms to create a waist. Now shred some more flax and divide it into two bundles. 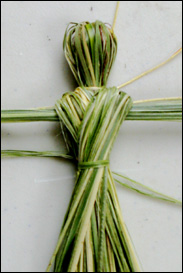 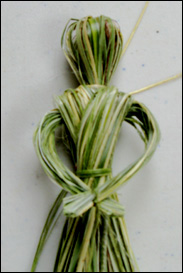 Bend the arms around to the front and tie them together in the front of the body. Cut off the ends of the flax, shaping the ends into hands. 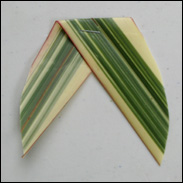 To make very simple wings, take a piece of a flax leaf and scrape a blunt knife along both sides to soften and dry it a little to prevent the wings from curling up. Fold the flax on an angle with the fold at the top and a piece of flax coming down at an angle on each side and cut these sides into wing shapes. Staple the pieces in place close to the fold. (I used variegated flax to make the wings look feathery but no doubt more elaborate wings could be made by splitting and folding the flax in other ways). Attach the wings to the angel’s shoulders at the back. I stapled the wings on but you could use superglue. 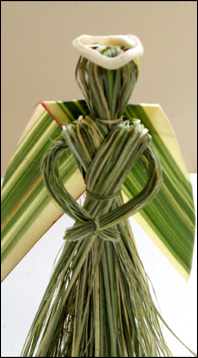 You can draw a face on the angel or use a shell for her face. I’ve left the face as it is but have given her a halo by placing a rounded, smoothed-by-the-sea piece of shell on the top of her head.

Trim the ends of her dress off evenly at the bottom and cut off any stray threads. If you want to stand the angel upright on a flat surface, spread her robe out over something like a small stone or piece of wood. This will help her to keep her balance so she doesn’t fall from grace!!

For those who are waiting for my book, Weaving Flowers from New Zealand Flax, you may be interested to know that the writing and illustrations have now been completed. I’m currently sorting out its printing on my home printer. Printing is a slow business on a home printer but it shouldn’t be too long before the book is ready for sale.