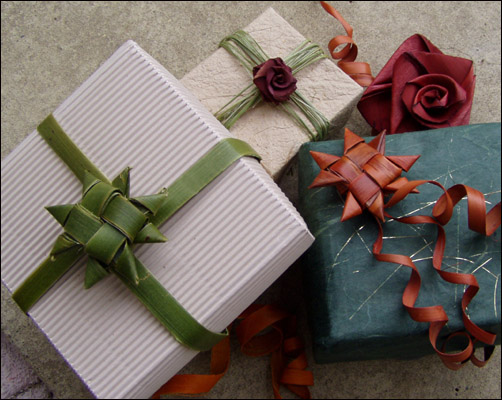 Have fun with gift wrapping by using flax for decoration on your gifts! Shredded flax is great for ties, flax stars with curled flax ribbons are an ideal decoration for Christmas gifts and, of course, flax flowers are an appealing addition to any gift.

To make a star with flax, you will need four strips of flax about one centimetre wide and thirty centimetres long. If you want to tie the ends around a parcel, once you’ve made the star, you’ll need to make the strips as long as possible. Soften the strips by scraping a knife along the underside (dull side) of the strips and then lay them together in pairs and use the pairs as if they were one strip for now. Wrap the first strip around your fingers and keep a loop at the top. Hold this in place with your thumb or it can be held in place with a peg. 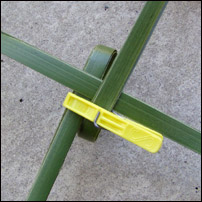 Place the second pair of strips horizontally across in front of the looped strip and behind the strip that is pointing upwards.

Take the end of the strip that is pointing out to the left back around behind the loop, across in front of the strip pointing upwards and then poke it through the loop. 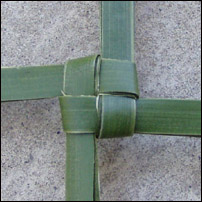 Tighten the weaving by pulling each set of ends in the direction they are pointing so that there is now a woven square. 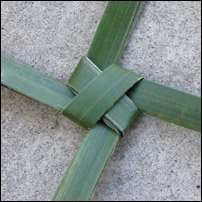 Turn the woven square over and hold the weaving so that the strip on top of the two in the middle of the square is lying with the top on the right and the bottom on the left. 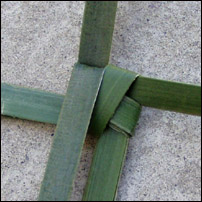 Take one strip of the two strips lying together at the top and fold it down on itself. 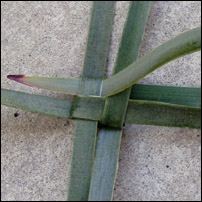 Continue folding down one strip on itself in an anti-clockwise direction around the square. Secure all these by poking the last strip under the first strip that was folded down. The woven square now has two strips coming out from each side. 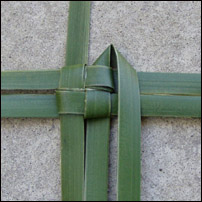 Take the right strip of the two at the top and fold it behind and across to the right and then forward and down. 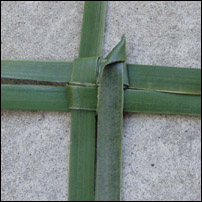 Fold the strip back on itself to create a point and secure this by poking the end back down underneath the strip where it came out from, making sure you don’t pull too far so that the point is pulled right through. 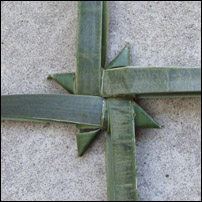 Repeat this and make a point on the other three right-hand strips. 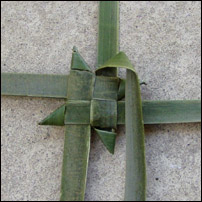 Turn the star over and make points on the other four strips, only this time fold the strip forward and across and then down, rather than behind and across as before. 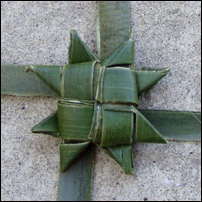 There will now be four ends coming out from each side of the star. Cut the ends off closely and the star is ready to attach to the gift. If you want to use the ends to tie the star to a parcel, cut off only one set of ends. 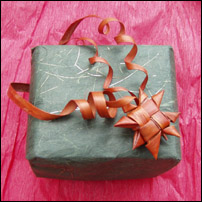 To curl flax, wind it tightly around a dowel or similar while it is still fresh and green, or still wet after being dyed. Then leave it to dry. The flax will then be set in place in curls.

To shred flax, use a fork with prongs that are close together or a dog comb. Pull the fork or comb through a small width of the flax at a time. If you want the flax to be shredded more finely, pull a nit comb through it several times after first shredding it with the dog comb or fork.

Also, check out earlier comments received on this blog post when it was hosted on my original website as “Gift wrapping with flax”.