I saw this woven bag hanging on a stall in a local Saturday market and the long cylindrical shape of it caught my eye. I had a closer look and noticed that the well-used bag had been woven with a good deal of skill, and I hadn’t seen some of its weaving techniques before. I was interested to study the construction of the bag in more detail, and so I bought it.

The origin of the bag is a mystery to me — I looked on the internet and through my books to see if I could see a similar one, but had no luck. The bag is woven with a soft natural material which appears to be flattened tubes so it’s likely to be a soft rush or reed. I had initially thought the bag may have been an Australian Aboriginal dilly bag, because of its shape, but I discovered dilly bags are usually made of twined fibres rather than woven strips. Because the bag has the appearance of being a traditional bag rather than a modern piece, and because the weaver has used several complex techniques, it indicates that the bag comes from a country that has an established weaving history. 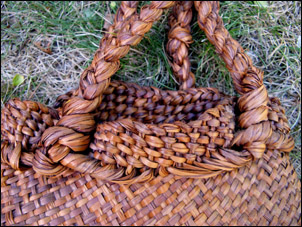 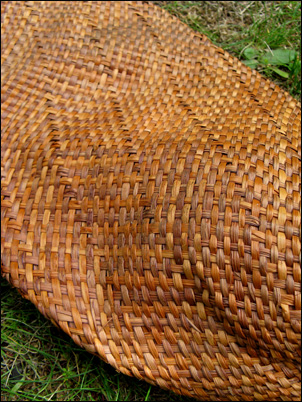 A simple one-over, one-under diagonal weave is used for the main body of the bag. However, a spiral pattern in the weave shows up when the weaving is seen from an angle. This spiral pattern is made by one strip being woven over two strips in a row, with this happening at the next point across in each consecutive row, thus making the spiral pattern. This change in the weave may also help to shape the bag.

The difference in the colours between the outside and the inside of the bag probably indicates that the bag has been used a lot. The colour on the outside of the bag is a faded mid-brown, but on the inside two colours are visible — a deep mid-brown and a dark rich brown — and these have been used to make a patterned design in the weave. Both shades appear to be the natural colours of the material, so maybe the material was treated in different ways, either with natural dyes or by another method, to achieve the differences in shade. 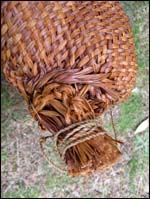 It’s difficult to work out how the base of the bag has been constructed, but it appears that all of the strips have been pulled and twisted together and then a plait has been woven around the strips to hold them in place. A single fine twisted cord also holds it all together. I have seen a somewhat similar type of finish on a jute string bag made in Bangladesh, but in that case the construction — where the threads are all pulled together around a circlet and then tied together in a large knot — is easier to see. 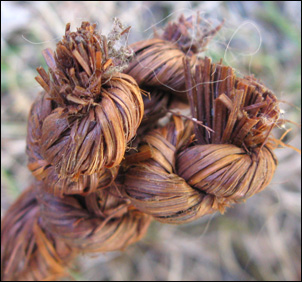 One of the things that I find particularly appealing about the bag is the effort that has been put into the detail. For example, the knotted ends of the handles. The handles of the bag are made by plaits coming from the body of the bag. Each handle is initially made with two plaits, which are joined together at the ends into one plait, as shown in the top photo. Instead of finishing this plait off with one large knot, it’s finished by separately twisting and knotting each one of the strands that was used to make the plait, which ends up as three small knots bunched together. This detail, combined with the skilled construction of the bag, make this bag a very fine example of the craft of weaving.

I enjoy studying weaving techniques from different weaving traditions as they often provide a wealth of ideas and information that can be incorporated into my own weaving. Sometimes it’s easy to work out the way an item has been woven and sometimes it’s not so easy, and it does help to know the origin of an item. Have you seen a bag like this? Do you know what country this style of bag comes from? I’d love to hear from anyone who can shed some light onto the origin of this bag.