Receiving a text message at 4:15 am in Norfolk Island from my eldest son in Christchurch saying “massive earthquake” was the shocking start to my last day on the island (though fortunately my home was not damaged). I had just spent a week tutoring a series of flax weaving workshops, and spending time with local weavers, at the invitation of Norfolk Island’s Creative Arts community, and was heading home that day with the generous gift of a Norfolk Island hat, woven with Pitcairn Island pandanus by Wayne Boniface. Norfolk Island has a strong creative arts community including a Wearable Art Show. The entry pictured here is a creation made out of drain flax (bulrushes) by Wayne who explained how the design changed as he wove it and evolved into this lovely tropical, summery outfit. 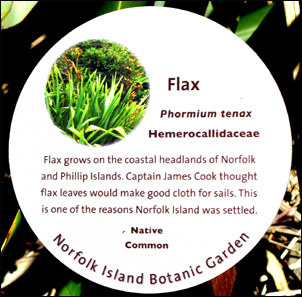 It was interesting to weave in Norfolk Island because there were new weaving materials with different properties to try. Even Norfolk Island Phormium tenax is quite different from the Phormium tenax flax we have in New Zealand. I found it to be much more like Phormium cookianum. The leaves are short, wide, soft and brittle, and have very little fibre content, although this didn’t greatly affect the workshops I took, as the pieces people were weaving didn’t require strong fibre. Although flax grows abundantly in Norfolk Island, it’s not generally used as a weaving material, as the traditional weaving is done with pandanus — a tradition that originated from the original Pitcairn Island settlers. 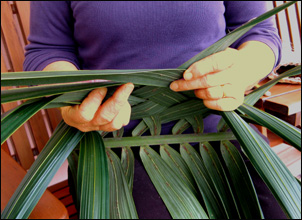 Kentia Palms also grow abundantly on Norfolk Island and so I was able to experience weaving with a palm leaf for the first time. I cut a complete leaf off a tree and then used one section with ten leaflets each side of the rib to weave a large two-cornered basket. The leaflets were soft and easy to weave, and are quite wide, and so it took only a few minutes to weave up both sides of the leaf, from the rib upwards, and then weave the corners and finish the top. I used some of the left-over ends coming out of the top to plait a handle up both sides. It’s easy to see why palm frond baskets are used in other islands in the Pacific for everyday use as it’s so quick and easy to weave a large basket. 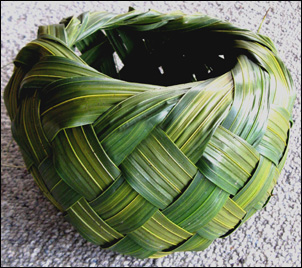 I also wove a round bowl from a Kentia Palm leaf using a technique that I hadn’t tried before, which makes use of the leaflets being attached to both sides of the rib. I enjoyed weaving this bowl, and plan to try it in flax, by using the plaited base used to start a large kete to mimic the rib of the palm. Unfortunately I was unable to bring these articles through New Zealand Customs as they were still green. (They could have come through Customs if they’d had time to dry.) 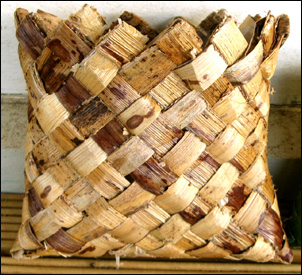 Another weaving material that is traditional to Norfolk Island, and one I particularly liked because of its mottled brown markings, is rahooloo or banana bark. The bark is easily stripped off the trunk of the tree because the trunk tends to shed its bark anyway. Once the bark is stripped off it is plaited into long strips in preparation for weaving a Norfolk-style hat or a basket. I used single strips and wove a little two-cornered basket which I was able to bring through New Zealand Customs as it was quite dry. 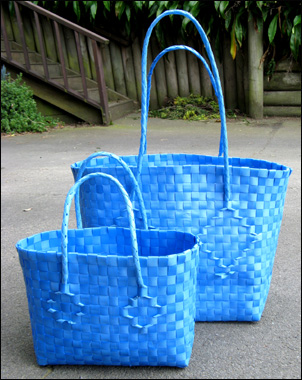 The Norfolk Island weavers also make use of packaging strapping to weave utility baskets, like the ones pictured here, woven by Wayne Boniface. These baskets are woven around a wooden form. The strips are nailed to the bottom of the form to hold them in place and then woven with a vertical/horizontal style of weaving. The handles are made with a four-plait cord, and the ends of the cords are woven into the body on the outside of the basket to create a decorative pattern. These baskets are for everyday use and are ideal when collecting shellfish, as the excess water can escape through the gaps between the waterproof strips.

If you are planning a trip to Norfolk Island and would like to meet some weavers, visit the Golden Orb Bookshop and Cafe on a Wednesday. There you’ll be able to see a group of weavers making traditional Norfolk Island hats and have the opportunity to purchase one for yourself. The welcome and friendliness I received in Norfolk Island made tutoring the workshops very enjoyable as we all shared tips and ideas for weaving. 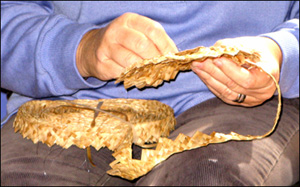 Although pandanus will no doubt continue to be the most popular weaving material in Norfolk Island, I am hopeful that flax will start to be used a bit more as weavers become accustomed to the different weaving properties it has.