Weaving a flax belt is reasonably straightforward — a first-time weaver completed a belt on the second day of a workshop I tutored last weekend. Using the same basic pattern, it would be easy enough to add your own modifications and create a unique item.

The belt made in the workshop was one of my designs that used a greenstone bangle for the buckle. The bangle is woven into the weaving at one end and at the other end a folded-over strip with a buttonhole included in the weaving hooks around the bangle and buttons up inside. 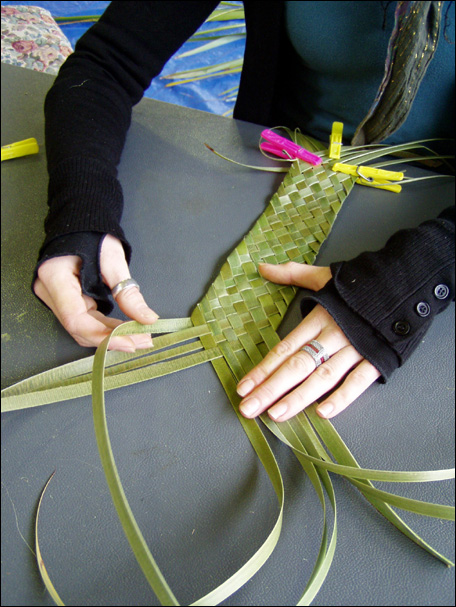 To make the belt, use flax strips about .8 cm wide. Prepare twenty strips (ten more if the flax you are using is short in length) as extra strips will be added in when the ends of the original strips are nearly reached. Start by twining ten strips together in a row and then weaving up. Fold the strips over at the end of the rows instead of twisting them. This makes a neat edge although both sides of the flax will show in stages along the belt’s length. Add a new strip when there is about 10cm left of the old one. Weave the new strip along with the old one and then continue to weave with the new one as the old one runs out. Weave the length you want for your belt taking into account the space that the bangle will take up. 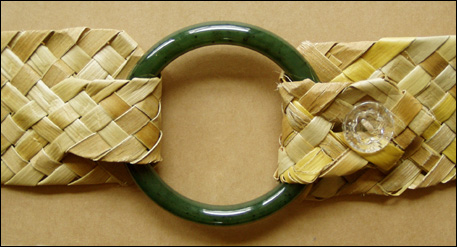 Any sort of bangle or buckle without the centre pin could be used for this design instead of the relatively expensive greenstone bangle.