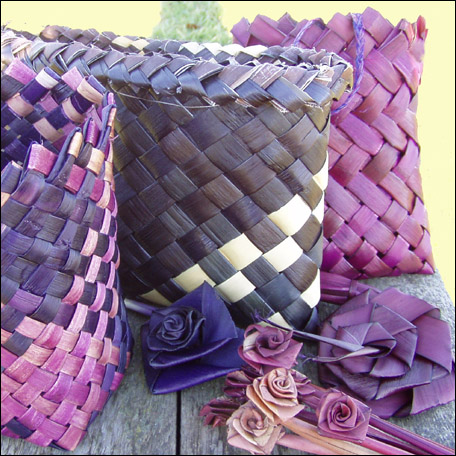 The format of my two-day workshops has been evolving as I’ve learned more about what first-time weavers are ready to learn on the second day of a two-day workshop. I tutored a two-day workshop at the Christchurch Arts Centre last weekend and, for the first time, I included a session on dyeing flax. Naturally enough, people want to be able to weave with the flax once they have dyed it, and they’re often keen to try out traditional dyed weaving that is geometrically patterned. Unfortunately this requires a construction technique that is perhaps a little too complex to tackle for people who are just beginning to weave — and so to answer the question of “What can I do with the flax now that I’ve dyed it?”, I showed them how the different colours could be mixed simply and semi-randomly in their weaving for interesting effects. 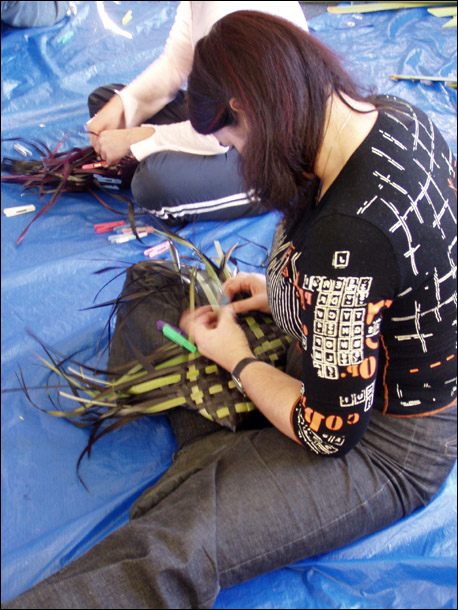 This worked out well. One person added some undyed strips to mostly black strips for a striking stripe feature in a simple kete. Another, using one colour for the warp strips and a second colour for the weft strips, wove a four-cornered container. Because of the four corners, this placing of colour produces broad blocks of the same colour as the corners are woven and then a combination of a checkerboard and broad blocks of colour as the sides are woven. In the two-cornered kete, this placing of separate colours in the warp and weft produces a complete checkerboard pattern.

Teri dyes were used for the dyeing and the softened flax strips were dyed while they were still fresh and green — although the colour of the dyed flax will be more true to the original colour when using this particular dye if the flax is boiled first. Flax can be also dyed after it has already been woven but the weaving will shrink slightly as it dries so this can result in areas where the full dye colour hasn’t reached the flax at the cross-over of the strips — not such a good look and a method I don’t use for this reason.

Experimenting with different amounts of dye and mixing dye colours can produce great results! For example, the blue dye pot had a smaller dye-to-water ratio than the manufacturer’s recommendation and resulted in the flax dyeing to a stunning teal colour that reminded one participant of the colours of paua.

Patterns for the traditional Maori colour-patterned baskets, or kete whakairo, can be found in Raranga Whakairo, a book by Mick Pendergrast reviewed on the Reviews page.