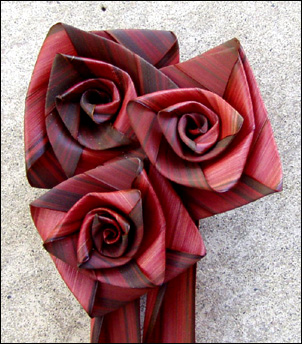 Have you ever noticed that dyed flax often loses some of the natural sheen that can be seen on freshly harvested flax, leaving the colour flat and dull? It seems that the sheen comes from a layer of wax on the surface of the flax leaf. Apparently, all plant leaves have at least some wax on the surface of their leaves — mainly to waterproof them but also to provide a degree of protection from the sun’s ultraviolet rays, and from disease and grazing by insects.

I recently did a series of experiments with 15 different flax varieties, to see if I could identify the factors responsible for this loss of sheen in more detail, and I’ve just posted the results in a new Minimising the loss of sheen section on my Dyeing flax page. Personally, I’ve never liked the loss of sheen on dyed flax. I don’t mind the gradual loss of colour and sheen that occurs as natural flax dries, but coloured flax without a sheen often seems to make the flax look a bit too artificial for my taste, especially if the flax is dyed in an intense colour, which just seems to accentuate the relative absence of sheen. In fact, up until a couple of years ago, I hardly ever wove with dyed flax, and found myself in agreement with Dorothy Ramae Mackinnon, in the book Every Kete has a Story, when she wrote:

I’ve spoken of [Auntie Stut] at times to others and they’ve said, “Oh yes she was a very plain weaver”. We now focus so much on kete whakairo (ketes decorated with coloured geometric patterns), we think that shows us as prestigious weavers! Lately, I’ve not touched dyed work. I’ve done that one. Got that out of my system! I’ve gone back to the plant itself and keep looking at its subtleties. I feel that some of that subtlety has been lost because of the amazing intensity of our dyes.”

However, I’ve begun to change my mind over the last couple of years, and now feel that dyed flax — even flax dyed in intense colours — has its place. Part of the reason for my change of mind has been working on a booklet of instructions for woven flax flowers in different designs. Flax flowers don’t need the strength that most flaxworks need, so they can be woven from Phormium cookianum, or wharariki, which comes in a lot of different varieties with such bright, beautiful, natural colours, such as the leaf and flower illustrated at the beginning of this blog post. Most of the flower instructions in the booklet have been woven from coloured, variegated Phormium cookianum. 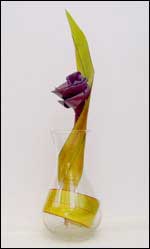 For the long list of people who have asked to be notified as soon as the booklet comes out, and have been waiting patiently, in many cases for several months, I must apologise once again. There are several reasons for the delay. Firstly, I’ve been including more and more weaving designs for flowers, and improving the photography and layout as I’ve gone along. Secondly, I recently moved from my well-established lifestyle block in the country to the city, and the move has taken up quite some time. Thirdly, having finished working on the instructions, it seemed silly to release the booklet without showing at least some examples of what can be done with the flax flowers once they’ve been woven.

Unfortunately the beautiful colours of variegated Phormium cookianum fade all too quickly, and flax flowers really suit bright colours, so I’ve been getting into dyeing more than ever before. Being in something of a hurry to finish the booklet, and not knowing anywhere near as much as I wanted to know about retaining the sheen on dyed flax, some of my first efforts were far too dull. Hence my current experiments. At some point, I’ll do more experiments with dyeing, but I’ve done enough to be able to get back to the booklet without the dyeing being quite such a hit-and-miss affair.