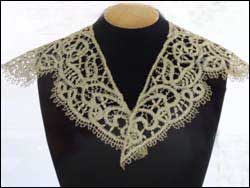 What do forty-two kilometres of rope used in Nelson’s sailing ship, HMS Victory, a traditional Māori feather cloak, and the Victorian lace collar in the photo all have in common? They’re all made with strong, thin fibres that have been stripped from the leaves of the New Zealand flax plant. For hundreds of years, Māori used this fibre to make clothes, ropes, fishing nets and bird snares. Later, European immigrants developed large-scale rope manufacturing using a stripping machine that could process up to 250 kilograms of fibre a day. 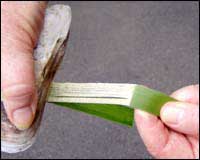 Thread stripped from the leaf by hand is a much finer thread than thread stripped by machine. In traditional hand-stripping, a mussel shell is scraped along the length of a strip of flax, forcing the green fleshy outer layer of the leaf down through and away from the fibres, and leaving the fibres clean and clearly separated into individual threads. With machine stripping, the whole leaf is put into a revolving metal drum where wooden paddles beat the green pulp off the fibre. The pulped leaves are then put through a scrutching machine which dresses the fibre by removing the short fibres and cleaning off any remaining particles. However this process doesn’t clean or separate the fibres completely, so machine-made flax thread is thicker and rougher.

The difference between fibres produced by hand and those produced by machine became very clear to me while I was preparing a talk on flax weaving for the 2008 conference of the New Zealand Lace Society. I thought lace-makers might find it interesting if the talk included a demonstration of lace-making with flax fibre, even though I hadn’t tried this before. However, I’d had plenty of experience with linen and cotton fibre because I used to be heavily involved in lace-making and the NZ Lace Society. So the talk was a good chance to catch up with old friends — and I also caught up with a participant of my flax-weaving workshops who had used flax fibre she had stripped by hand to make an award-winning entry in this years’ lace competition.

As well as giving a demonstration, I wanted to give the participants the opportunity to have a go at making bobbin lace with flax fibre themselves. I already had some machine-made flax fibre that I’d purchased from the Templeton Flaxmill Museum near Riverton, but this proved to be just too irregular and thick to wind easily on lace bobbins, so I prepared the flax fibre by hand. Although fibre can be stripped from many different varieties of Phormium tenax, I wanted to use the very best varieties, so I approached the National New Zealand Flax Collection at Landcare Research in Lincoln and received permission to gather leaves from two of the traditional weaving flaxes, Arawa and Makewero, that are both known for their long, clean fibres. I stripped the leaves in the traditional Māori way — with a mussel shell — for the first time, and have just updated my Preparing flax page with a some tips on the difference between stripping flax with a mussel shell and a blunt knife.

Before setting up the lace pillows for lace-making with the flax fibre, I examined the lace collar shown at the beginning of this post. This formed the subject of a talk at the conference by Jennifer Quérée, Senior Curator of Decorative Arts at the Canterbury Museum. The collar was made by a Mrs Williams, and it received a special mention at the 1906 New Zealand International Exhibition. I noticed that it was woven with four strands of flax fibre per thread, and that the fibres hadn’t been twisted to make the thread. 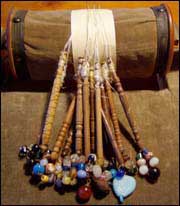 When making rope or a traditional Māori feather cloak, or in the threads traditionally used for lace-making, the strands of fibre are invariably twisted together to make a thread. This makes the thread stronger and allows new fibres to be twisted in, so that the thread can be much longer than the original fibres. However, after examining Mrs Williams’ work, and experimenting with flax fibre myself, it became clear that Mrs Williams knew what she was doing. Twisted flax fibre is just too thick for lace-making in the traditional method, so her four-strand fibres were limited to the length of the leaves from a flax plant.

For the demonstration, I set up one lace pillow with the bobbins wound with four strands per thread, and another pillow with bobbins wound with a single strand per thread. Participants who tried weaving lace with the four-strand bobbins found it quite difficult. The single-strand bobbins were easier to work with, but — compared with the threads traditionally used for lace-making — flax fibre is quite stiff and isn’t as slippery, so this makes it harder to tension the weaving. Also, each single fibre is made up of even finer strands which tends to make the thread quite fluffy.

All in all, it it became clear to all of us that Mrs Williams’ collar must have been a very challenging piece of work, and — like a traditional Māori feather cloak — it would also have taken rather a long time to weave.

Errata 3 Jun 2008
Since I first wrote this post I’ve made two corrections in it in light of Jennifer Quérée’s comment in the earlier-comments link below — the lace collar was made by a Mrs Williams, and I originally referred to her as Mrs Williamson. Also, the collar received a special mention at the Exhibition but didn’t win an award. Jennifer’s comment provides additional information on the collar.