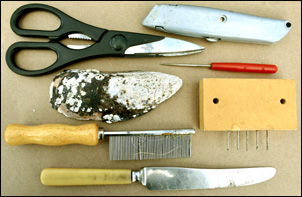 Links to sections of this page:

There are a few tools to be gathered together before making the flax strips. A craft knife for making a cut on the strips, a blunt knife like a butter knife or mussel shell for softening the strips, an awl or sharp pointed tool for splitting flax and a dog comb or similar for shredding the flax ends. Pictured here is a tool made for making several even-width strips on the flax leaf but this is not essential. 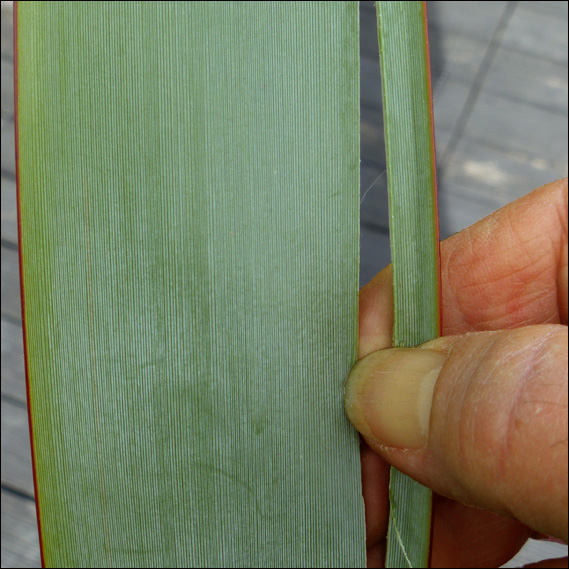 At the base of the flax leaf the two sides of the leaf are joined together with a sticky gel which makes the base heavy and thick. The leaf separates about halfway up to produce a two-sided leaf with a hard midrib. To start making strips for weaving, fold the two sides of this top part of the leaf together and make a split with a thumbnail or blunt needle about half a centimetre in from the hard midrib edge. Pull the rib away from the leaf all the way along the leaf. 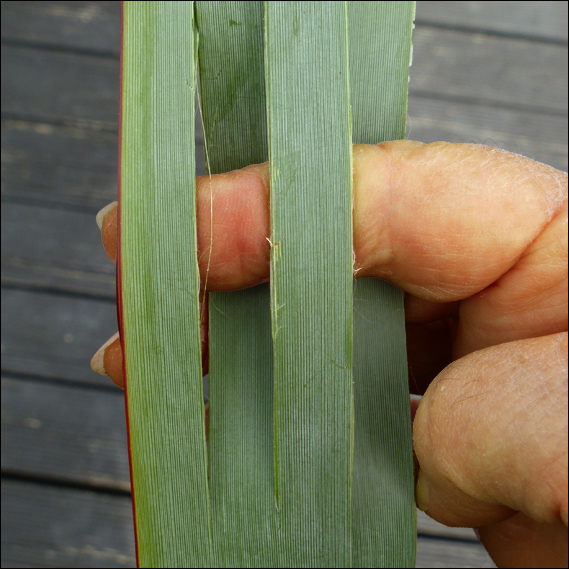 Now make even-width splits across the double-folded leaf from the rib edge to the soft edge. You can use a sharp-pointed awl or a specially made tool with evenly-spaced pointed tips, as illustrated above, to split the leaf. Do not use the strips of flax from the soft edge as they are too soft to keep an even weave. Interlace a finger between the splits and run the finger up the leaf to the top, splitting the leaf all the way. Pull the splits down to where the two sides of the leaf join together and cut the strips from the leaf at this join. Cut the strips off on an angle as this will make it easier when the weaving is being finished off. 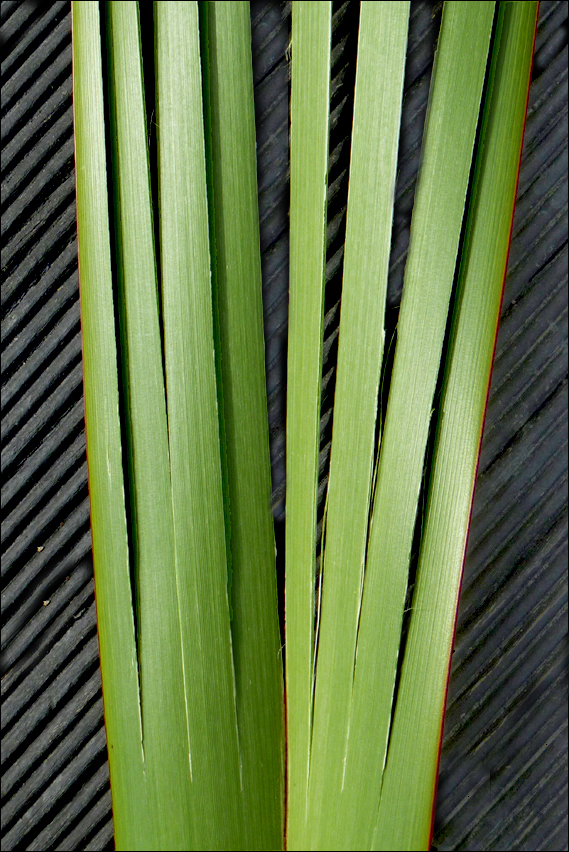 Once enough strips are cut, lay them out side-by-side on a flat surface. Check that the widths are the same. Even if you measured out the splits to keep the widths even, there will inevitably be strips that are too narrow or too wide. If strips are too wide, split a little bit off the edge to make them the same width as the bulk of strips. The strips that are too narrow can be kept for another project. Take out any strips made from the soft edge pieces. These are identifiable as they have a narrow coloured edge on one side. Then check the strips for holes and splits. Strips that are discoloured but not damaged can be used to give an individual pattern to the weaving.

Checking the strips for quality 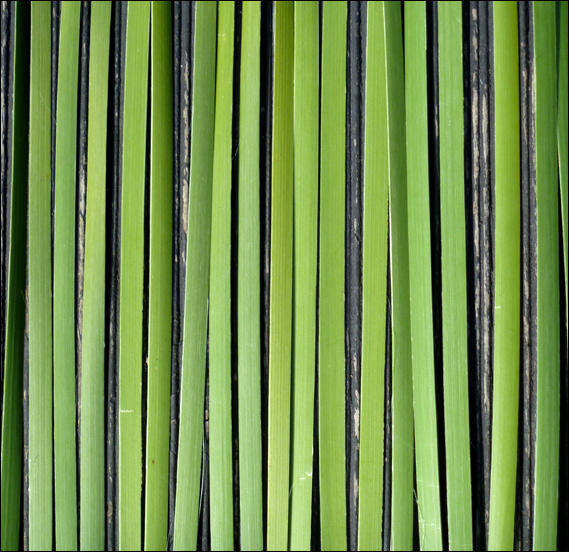 Check the strips for length by bundling them together with all the hard cut ends at one end of the bundle. Tap the ends down on a hard surface. Discard any strips that are too short by taking hold of the bundle at the end with the pointed tips and shaking it, allowing the shorter strips to fall out. Finally, count the strips again to make sure there are enough. 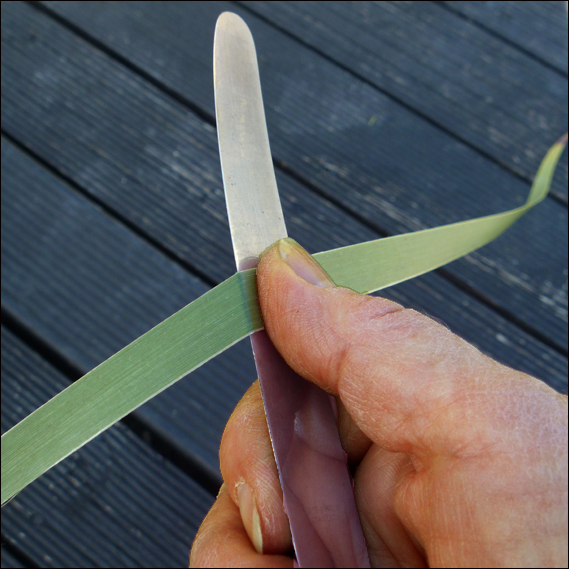 Softening the strips before weaving makes them more pliable to weave and removes some of the moisture content.To soften the strips, place the blunt edge of a knife, such as a butter knife, against the dull side of the flax strip (the underside of the leaf) about halfway along the length of the strip. Hold the strip against the knife with your thumb, and pull the strip through on about a 90 degree angle to the knife. Scrape the flax in each direction, pulling to the end of the strip each way. 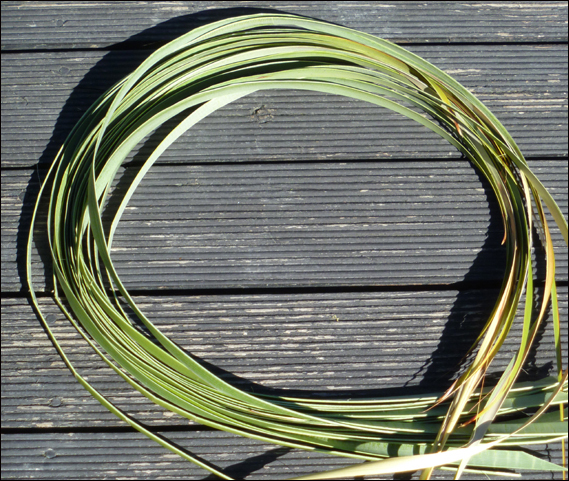 If the flax has been cut the same day that you’re weaving, and if the softened strips feel wet, they should be left in an airy place for an hour or two to dry out. If the flax becomes too hard and dry while weaving, wrap it in a damp towel. Sometimes wrapping in a damp towel can result in the flax drying to a darker colour, and depending on the variety of flax, it could dry to a golden colour or to a light brown. Flax can also be soaked in water to remoisten it, and this will result in the flax drying to a mid-brown colour. If unboiled flax gets drops of water on it, the places where the water has touched it will stain to a light brown colour.

Some weaving techniques use flax strips with the fibre exposed at one end. Not all flax varieties have fibre that is easily extractable or long enough to make fibre ends, so test the fibre in a single strip from the flax plant you’re thinking of cutting to see if it is suitable. There are two ways to prepare the fibre ends on the strips. The first method is the traditional way and if the flax variety is suited to it, it is less time-consuming. The second method is more time-consuming, bit also more reliable, and can be used for any variety of flax that has a reasonable fibre length. 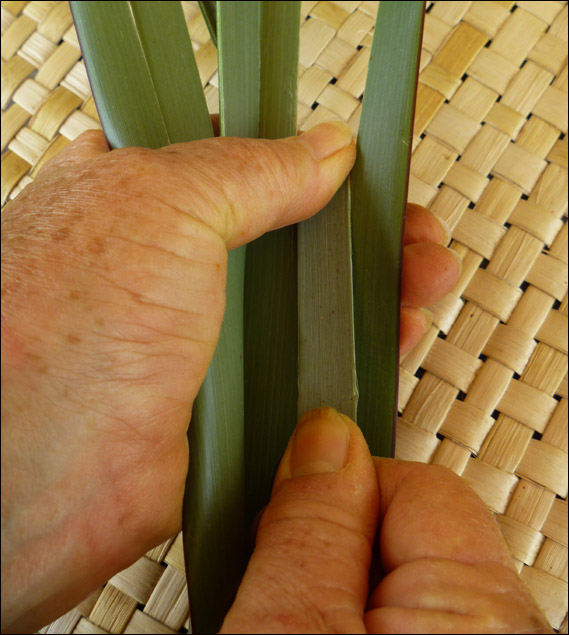 First method: Split the leaf the same way you would if you were going to cut the strips off the leaf, but don’t cut them off the butt end. Instead, starting with the strip that is next to the outside edge (some start with the strip that is next to the midrib), fold the strip down toward the base of the leaf and press the fold together tightly between your thumb and fingers. You can also press the fold down firmly on a flat surface with the heel of your hand. Whichever way you do it, the fold must be pressed together, or down on a flat surface, as tightly as possible in order to separate the fibre from the rest of the fleshy part of the flax. 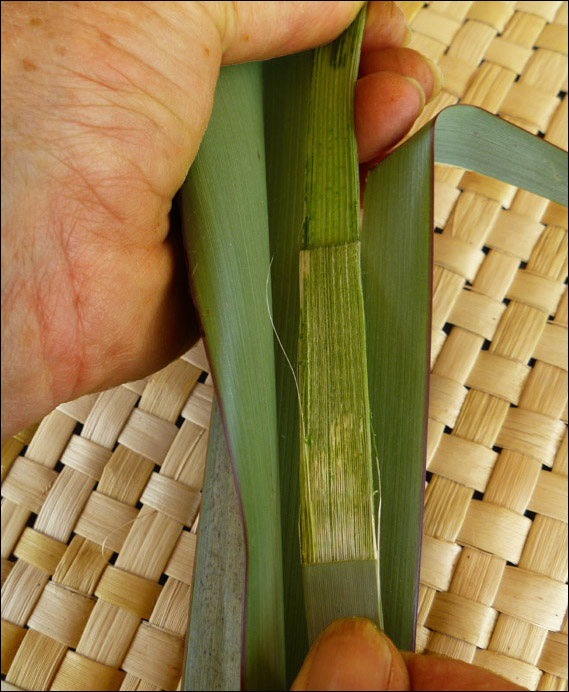 Now pull the strip down and away from the leaf in the direction of the base of the leaf, pressing hard all the time you are pulling. The fleshy part of the leaf will separate away from the fibre inside the leaf so that there is fibre at the end of the strip. Pull the strip until it detaches itself from the leaf. Pull the other strips off in the same way and then turn the leaf over and repeat with the strips on the other side. This is not always an easy way to make fibre ends on a strip and it is very dependent on having flax with fibre that extracts easily from the rest of the leaf. If some of the fleshy part of the leaf remains on the fibre end, it can be scraped off with a knife on a hard surface such as a block of wood. Alternatively, a strong-toothed comb can be used to comb the remaining bits off. 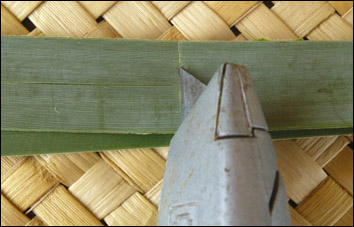 Second method: The second method is more time-consuming but is useful if the flax you are using is difficult for fibre extraction. Split the leaf in the same way as above and cut the strips from the leaf. Cut across the dull underside of the strip halfway through the thickness of the flax and about ten centimetres up from the cut end, using a craft knife or mussel shell — each tool is best suited to a slightly different technique. 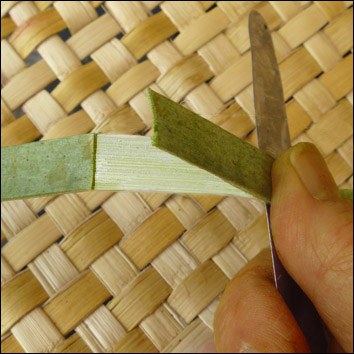 Now, with the butter knife, hold the flax strip with the dull side uppermost. Place the top blunt edge of the knife on the other (shiny) side of the strip at the place where the cut is. Pull the knife slowly along the strip from the cut, pressing heavily on the strip to peel off the fleshly part of the leaf. Pull all the way to the end. The fibre ends will now be exposed. It takes practice to master this technique — the flax must have some fibre in it and the cut must be the right depth so that the green fleshy part of the leaf is cut, but so that the fibre is not cut. 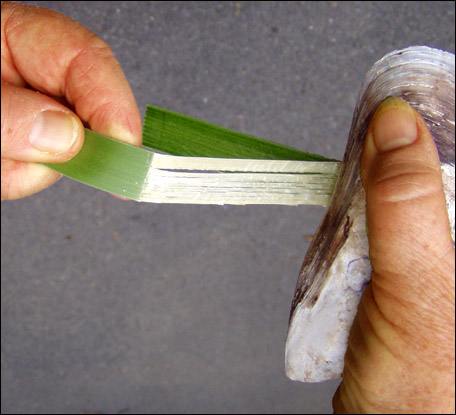 Alternatively, with the mussel shell, hold the flax strip with the shiny side uppermost. Use the blunt edge of the mussel shell — where it was originally hinged to the other half of the shell — to scrape the top side of the leaf. Start at the place on the leaf that has the cut on the other side. Pull the shell along the strip right to the end, and press heavily to peel off the fleshy part of the leaf, leaving the fibre ends exposed. 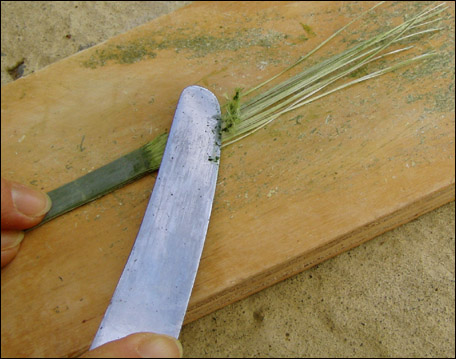 If not all of the flesh comes off, then — as with the traditional method of making fibre ends outlined above — it can either be scraped off with a knife or shell on a hard surface such as a wooden board, or a strong-toothed comb, such as a dog comb, illustrated at the top image on this page, can be used to comb the remaining bits off. Whichever method or tool you use, it’s best to strip flax as soon as possible after harvesting. Flax is much easier to strip before it’s begun to dry out. 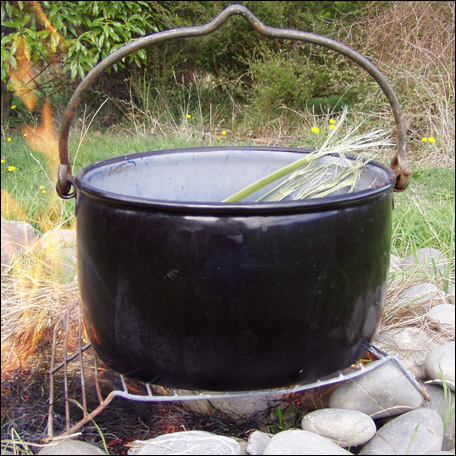 Flax strips can be boiled before weaving. The main advantage of boiling is that it will drive off some of the moisture inside the flax cells. This will shrink the cells, and shrink the strip width. Weaving with pre-shrunk flax will make for less final shrinkage in strip width when the weaving has fully dried out, and the weaving will be tighter. Another advantage of boiling is that the dried strips can be stored indefinitely. Boiled flax will dry to a paler colour after weaving, and won’t darken if it is remoistened during weaving.

Before boiling, cut the flax into weaving strips and soften them by scraping. Bring water to the boil in the large pot and fill the other container with cold water. Tie the prepared strips together in bundles of 10-12 strips and lower one bundle at a time into the boiling water. (If there are too many strips in a bundle, they won’t boil evenly). Boil the bundle for three to four minutes, lift it out of the water with tongs, put it briefly in the container of cold water to cool, and then hang it out to dry off. Repeat with the other bundles.

Weaving boiled strips straight away
If you want to weave the strips straight away, don’t let them dry too much — just enough for the excess moisture to dry out, so that they feel damp rather than wet. This will generally take 2-3 hours. When you come to weave the strips, soften them again by scraping. Scraping can sometimes bring a little bit of moisture to the surface, which you can dry off with an old towel.

If the flax is not going to be used straight away it can be dried completely on a rack and then stored in a dry, airy place. Unwoven strips of dried flax are somewhat brittle and need to be treated with care as they will crack if they bend too far.

There are several ways to make fully-dried strips pliable enough to weave with. With all of these methods, you will need to test the flax for pliability. Scrape a strip as if you were softening it for weaving. Once scraped, the strip should feel damp but not wet and be pliable enough to bend easily without cracking. Don’t let the strips soak up so much water that water comes out of them when they are scraped.

Once the strips have been remoistened, scrape them with a knife before weaving. The boiled strips can be sprayed sparingly with cold water to keep them moist while weaving. Remoistened flax can dry out quickly, so keep the weaving moist by wrapping it in damp towels if you are going to leave it for any length of time.