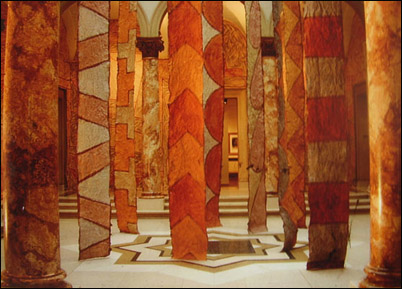 I recently took part in my second paper-making workshop with Mark Lander, a well-known Canterbury artist, who constructs sculptural artworks with paper made from New Zealand flax. Mark often paints his sculptures with naturally-coloured clays that he has collected from the local hills. Pictured here is a sculptural installation he made with very long sheets of flax paper.

As flax weavers know, flax has tough fibres and a very high fibre content. Indeed, some of the traditional forms of Māori weaving involve stripping flax right down to the pure fibre. For paper making, it is the high fibre content that makes flax a particularly suitable raw material. For the technically-minded, when paper is made with any sort of plant fibre, the fibres lock together in a process called hydrogen bonding. Plants rely on cellulose for the strength in their branches and leaves, and paper is essentially a network of cellulose fibres held together by these hydrogen bonds.

Making paper with flax follows the same basic process as hand-making any sort of paper, and there are plenty of instructions for paper-making on the internet, most of which use scrap commercial paper as the raw material for hand-made paper. If one uses plant leaves for all or part of the raw materials, they can generally be softened enough for the first step in making paper by cutting them into small pieces and boiling them in water for a couple of hours, but flax is so tough it needs an extra step. 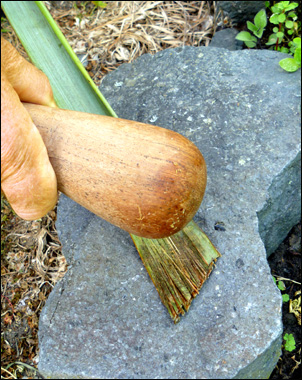 To reduce the flax into small pieces, Mark bashes the flax leaves with a piece of wood to begin to split them apart and soften them (which is quicker than stripping them right down to the fibre). He then cuts the leaves crosswise with a craft knife, leaving pieces about 5 mm long. Another option can be found in Making paper in New Zealand, a book by May Davis, which contains clear, easy-to-follow instructions for making flax paper. May does not bash the flax and suggests removing the hard midrib of the flax leaf and cutting the leaves into 1 cm pieces with scissors. The extra step in making paper with flax involves using a solution of caustic soda in a stainless steel pot. (If the pot is aluminium, it will be eaten away by the caustic soda and will give off flammable hydrogen gas.) You can buy solid caustic soda from a hardware store or supermarket. Handle it carefully and make it up into a solution, using about half a cup of caustic soda for a large potful of water.

Place the flax pieces in an empty stainless steel pot, and then add enough caustic soda solution to cover them. Boil the pieces about 40 minutes to an hour until they change colour. Alternatively, you can soak the pieces for a few days without boiling. Rinse the caustic soda from the pulp in a sieve under cold running water. From here on, you can follow standard paper-making instructions. If you want your paper to have an even texture you will need to run the blender for several minutes for each blender load. If you want a rough look with visible pieces of flax, you can miss out the blending operation for a small proportion of the pulp, and/or include a few longer pieces when you initially cut the flax pieces. 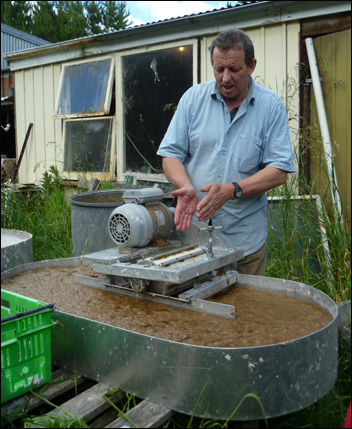 For those who want to make paper in bulk, Mark has developed and manufactures the Hollander beater shown here, which he sells and exports at a fraction of the cost of other manufacturers of Hollanders. The Hollander takes the place of a blender and pulps the fibres rather than slicing them, which results in a higher quality paper-making pulp. 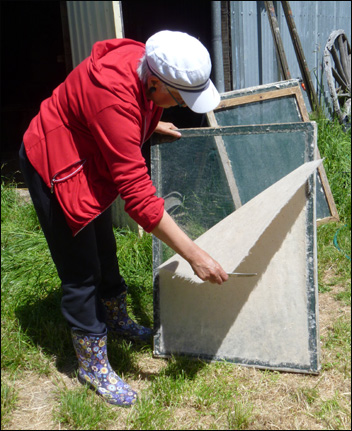 In the workshop, we made large sheets of flax paper and left them in the sun to dry completely before peeling them off the frame. The other workshop participants were artists making paper to paint on. For my part, I’m not sure what I’ll use the paper for and am still awaiting inspiration. Mainly, I participated in the workshops to learn more about another use for flax, and found Mark’s workshops enjoyable as well as informative. Mark now has a studio and gallery in Amberley where you can learn how to make paper.