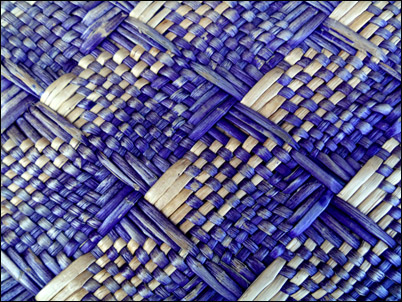 This eye-catching pattern belongs to a well-worn basket (kete whakairo) that a participant brought to a two-day weaving workshop at Waikawa marae (raranga wananga noho marae), which I was invited to tutor at recently. What particularly struck me is its vivid three-dimensional effect, which is hard to fully appreciate unless the kete is seen in the flesh, so to speak. I also like the way the pattern can be seen as either a checkerboard of vertical squares or as a checkerboard of diagonal squares. It’s woven in blocks of one-under, one-over (takitahi), interspersed with blocks of strips woven in longer weaves. The tightly woven blocks keep the weaving very even and the old kete still has a good shape. If you’d like to try it out, it’s pattern #76 in Mick Pendergrast’s book, Raranga Whaikaro.

Weaving workshops can be learning experiences for everyone involved, including the tutor and it’s always good to pick up new weaving tips and see what people have made. This workshop included Māori language (te reo) and songs (waiata) as well as weaving, which is why I’ve included some Māori words in this blog post. 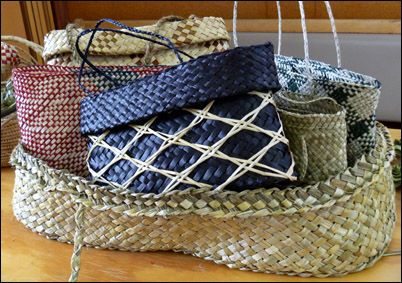 Marama, an experienced weaver, brought along some of the kete whakairo she has woven recently, as well as a baby pod (not for carrying) (wahakura). She mentioned that there were a couple of things she would do differently next time she wove a wahakura. Firstly, this carrier wasn’t quite wide enough for a baby, so to make it wider she would add more strips into each starting plait. The other tip she gave is to use a really strong flax for the wahakura as ordinary flax isn’t strong enough to give structure to the sides and hold them upright. For more weaving tips check out Rita Baker’s YouTube videos tutorial 1 and tutorial 2. 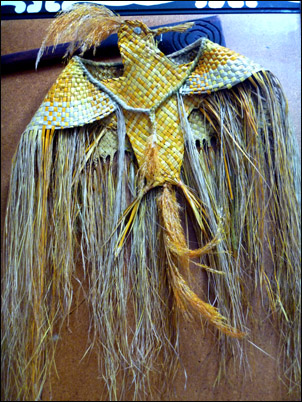 A striking and well-made sculptural piece brought along by Helen was the result of weaving a corner in a different way. Helen had started to weave a kete but instead of crossing two strips to start the corner, she took them out to each side. This inspired her to weave the bird instead and the outwards turn became the start of wings. Using a combination of her sculptural and weaving skills, Helen ended up with this magnificent bird (kahu). It wasn’t what she started out to weave but it turned out to be a unique piece of weaving.

One of the projects that the weavers are working on for the marae is a mat (whariki) with flat joins. The flat joins are important as the mat will form the ceremonial base on which to rest a coffin at a tangi. The usual method of joining weaving using a plait wasn’t suitable as it is too bulky. The method they were using to make the flat join is the one shown on page 151 in Peter Buck’s book The Coming of the Māori, where the new and old strips are worked together as one and then the old strips are turned back and woven back down to lock them into place. 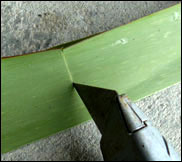 Several weavers decided to make ketes using the whitebait (Koeaea) pattern which requires a plaited base to set the pattern (whakapapa). As I watched one of the weavers, Helen, preparing her strips, I noticed she used an extra step to prepare the fibre (muka) ends that I hadn’t encountered before. She made a cut half way through the thickness of the leaf where the fibre end would usually start in the traditional method of preparing fibre ends. 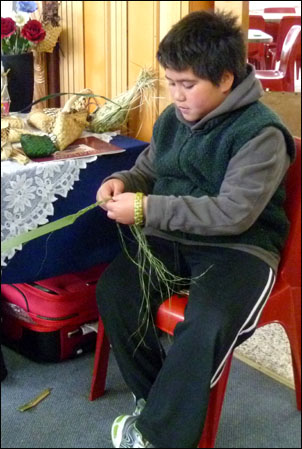 During the weekend, people wove flowers (putiputi) using my book as a guide, large containers (waikawa), small baskets (kono), including those with flaps, baskets with plaited tops, a three-cornered basket, wristbands, balls and rope. The young boys (tamariki tane) learned to plait for the first time and made a plaited rope (whiri kawe) with shredded flax. At the other end of the scale, Peter, an experienced stone carver, was making a fine rounded four plait rope (topuku) to use for carrying fine stone vessels. 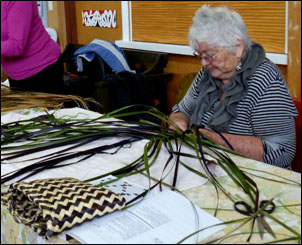 I thoroughly enjoyed my weekend with the people of Waikawa marae. Their hospitality was welcoming and their enthusiasm for weaving was exciting. It was a large group with weavers of varying abilities which brought a vitality to the group and a buzz of conversation as people helped each other. Waikawa marae plans to have another raranga wananga in 2013 and to continue with regular weaving sessions.