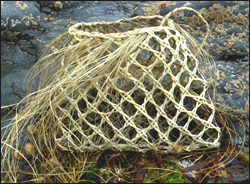 Eighteen people, coming from Okains Bay, Decanter Bay, Charteris Bay, Pines Beach, Loburn and Havelock as well as Christchurch, took part in our charity flax weaving workshop last Sunday. As usual for a workshop, there were beginners and experienced weavers attending, which is a great mix as experiences are shared and people help each other. Most people wove a two-cornered basket or kete and a couple of people tried their hand at the open-weave basket made with the kupenga or fishing net weave illustrated here. Later in the day people had time to make large containers.

There were three different types of splitting tools in use in the workshop, apart from awls and fingernails! Sharon’s splitting tools, which were originally used for shearing sheep, had been modified with the addition of a paua-inlaid wooden handle.

My splitting tools were made by my husband Rob using bodkins inserted into blocks of wood at equal distances. Kay’s were very original, being made from corn cob holders. Kay adjusts the distance between the prongs depending on the width of strips she requires.

In this workshop we raised over $1,000 for my 92 year-old stepmother’s only grand-daughter, who lives with the loss of her first-born son, to return to New Zealand from the UK and spend some time with her grandmother.

A number of people gave their time and contributed to help make this workshop a success: Rob Brown who helped gather flax, set up and put away the workshop tables, chairs and tools, Toby Brown who ably assisted with tutoring (his first time), Joy and Dave Bishop who made afternoon tea and helped tidy up and last but not least, Pat Talbot my lovely step-mum, who also helped with the afternoon tea.

Future workshops, which will be held to raise funds for other charities, are advertised on the Workshops page of my website. The next flax weaving workshop is 25th September 2016. Contact me to secure your place!