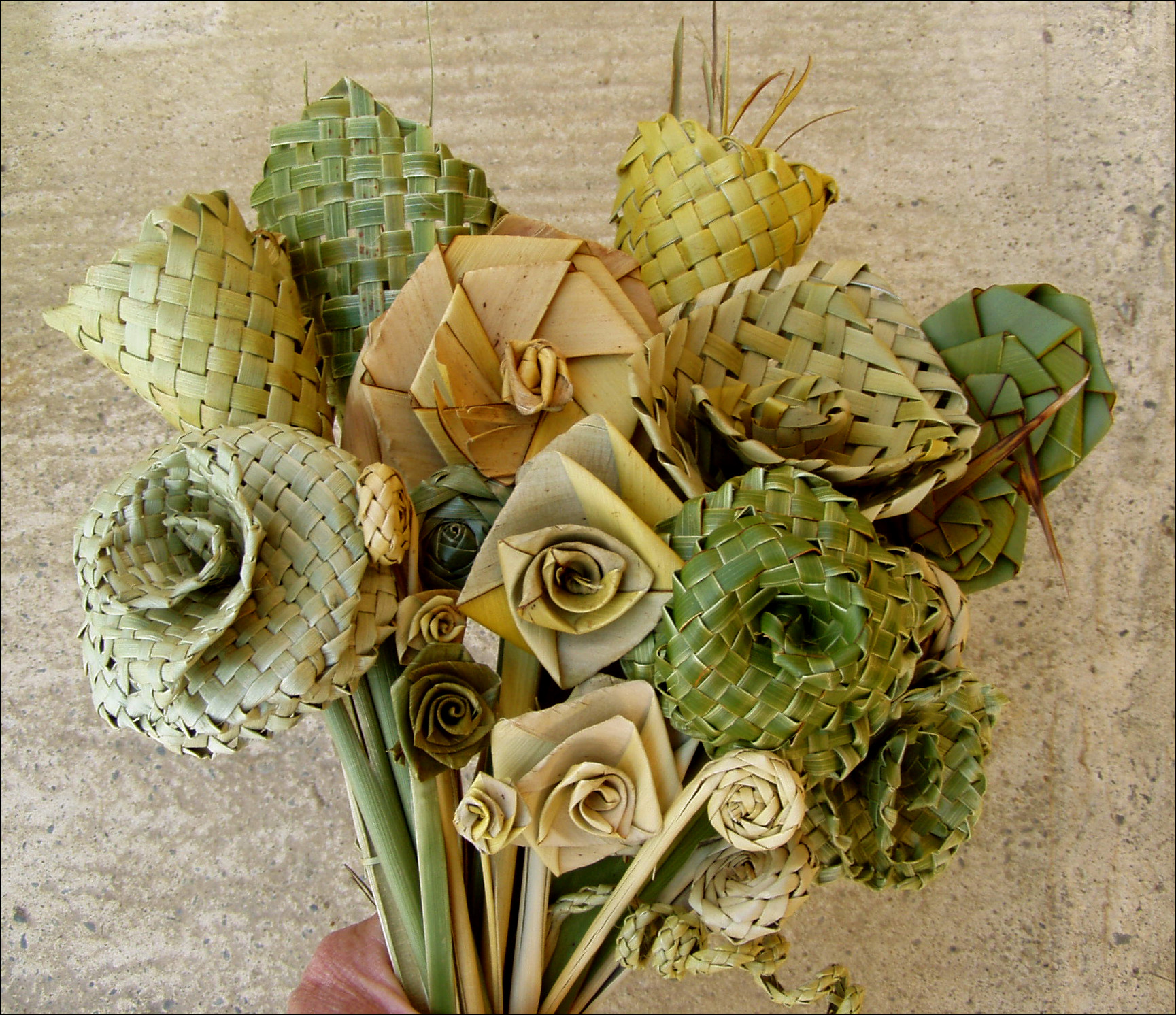 A lot of the one-off flax weaving workshops I get invited to run involve some kind of unique challenge. This was certainly the case for the art project I was invited to co-ordinate for this year’s national conference of the OSCAR Foundation, an organisation that runs out-of-school activity programmes for Primary School children throughout New Zealand. OSCAR conferences always involve an art project to be displayed at their national office — the one conference activity that every delegate can contribute to.

This year the art project involved weaving bouquets of flax flowers to fill three flax vases that I had made beforehand. Well, not really vases, more like tubs or barrels at the size I made them! As there is no specific time space allocated in the conference programme for working on the art project, all of the weaving had to be squeezed into lunch and tea breaks. This is where the challenge came in — teaching up to two dozen people at once, all of whom arrived at different times and had maybe five minutes to spare to make a flower!

There are quite a few different ways to fold or weave flax flowers. Depending on the time they had available, I either taught people how to quickly fold a simple flower or rose, or — for those who had more time — a fully woven flower. There were a few experienced weavers who were able to make their own varieties, and one or two people were keen to learn how to make a koru or a lily that they saw in the booklet that I offered for sale at the conference.

For part of the afternoon I was joined by two Samoan delegates who not only wove beautiful, delicate flowers but showed me how to make a couple of other types of flower as well. I have seen Samoan weaving before and noticed that people from Samoa use finer strips for the woven flowers, and they also soften the strips a lot more before weaving than is traditionally done by New Zealand weavers. I imagine this is partly because pandanus, the material used for weaving in the Pacific Islands, is a much softer and finer material and so they prepare the tougher flax leaves in such a way as to make them similar to pandanus. I’m not sure about this but it seems to make sense.

I also wonder about the origin of weaving flax flowers and when they first emerged. None of the old photos I have seen of traditional Māori weaving have flax flowers in them so it seems that they may be a late twentieth century invention. I first noticed a flower woven from flax in the early 1980s in Christchurch, so wonder if they originated about that time — although this may not be a true indication, as the population of Māori in Christchurch is quite low. Have any readers seen flax flowers made before the 1980s in New Zealand? Or in the Pacific Islands?